“I got something to say that might cause you pain.” The Beatles X the Mona Lisa Twins

It is a dimension as vast as space and as timeless as infinity. It is the middle ground between light and shadow, between science and superstition, and it lies between the pit of man’s fears and the summit of his knowledge. This is the dimension of imagination. It is an area which we call  Fed Day.

After decades of loose money, the Fed tried to apply the brakes Wednesday unleashing a 75 bps rate hike on Wednesday.

It’s like Thelma & Louise stomping on the brakes as their car flies over the Grand Canyon.

In this scene, Jerry is in the back seat with a look of sheer terror on his face when Louise looks back at him and says:

Wednesday was supposed to be a 50 basis point hike, but Powell relishes Transparency almost as much as Transitory so he Telegraphed the “possibility” of 75 bps on Tuesday. Appears Powell is a real “T” man.

Heaven forbid he surprise The Street.

That’s the difference between a lawyer like Powell and a public servant like Volker: a lawyer is a gun for hire who does his client’s (read constituents) bidding.

When air (free money) comes out of a balloon, it can do so in two ways. Either it pops all at once or it becomes detached and spurts all over the place.

This year’s decline has been the latter and Wednesday’s FOMC Cha Cha Cha was emblematic of hot air going all over the place.

Most of the hot air was at Powell’s Presser. The Fed Chair can’t resist having to taketh away without promising it’s Temporary.

Another “T” for Jerry.

To wit, Powell offered although he’s tightening now, the Fed will be loosening again around the corner.

Let me get this straight, the same guy who told us inflation is transitory is telling us he’ll be able to loosen again when he’s done because he can see the future so well.

So much for data dependent.

That twist of the tongue perpetuated a 100+ plus spike in the SPX.

I can’t help but wonder if the Fed isn’t just the hand maiden delivering gamma squeeze to his constituents.

Be that as it may, this is a technical newsletter and we offered in yesterday’s morning report that a Spike & Reversal to just above 3800 was on the table.

From an intraday low of 3722 the SPX spiked over 100 points ultimately stretching as high as 3837.

If the SPX manages to eclipse Wednesday’s high to satisfy 3844, it will have satisfied a Minus One/Plus Two sell setup.

This occurs when you have two consecutive higher daily intraday highs while the 3 Day Chart is pointing down.

If a snapback rally persists into the weekend, a 360 degree rebound equates to 3969.

This ties closely to the 395 or even 400 SPY strike for Option Expiration Pinball.

However, cycles are poised to exert their downside pressure once this rally is done.
The presumption is the vast majority of market participants assume now that the Fed has hiked, the bad news is out of the way and the market has flushed out and can sustain a rally.

However, if the market rolls over from here in short order after the FOMC rate hike, pure panic could erupt giving us the capitulation phase we’ve been looking for that attends every intermediate term decline.

If I am correct, the next decline will be powerful, perhaps the worst since the Bear market started.

As showed in yesterday’s report, 351 (SPY) squares out/balances out with June 26. 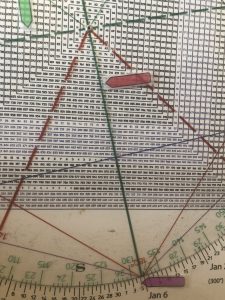 Earlier this month I showed the SPX weekly below.

Subsequently the index snapped the declining purple channel. Yesterday’s action saw a backtest of the lower rail of the purple declining trend channel.

My expectation is that the SPX will drop to test an intersection of the rising lower black channel and the smaller lower purple channel in the 3500 region. There is a strong likelihood this plays out by the end of June where multiple cycles collide.