A bear market can leave you broke, angry, and feeling like a fool.

The bear doesn’t just want your money. He wants your sanity, confidence, and self-respect.

In a bull market, you get rewarded for taking risks. And the bigger the risks, the bigger your profits.

Remember 2020 through early 2021? If you bought stocks, you did well. But if you bought cryptos, NFT’s, Lamborghinis, Miami real estate, and Rolex watches, you did even better.

But in a bear market, you can do what feels responsible… and still get your head handed to you.

So I want you to take my 7 unbreakable rules of bear market trading and put them to work for yourself.

Rule #1: Do Not Buy Stocks Just Because They Are Down

A few weeks ago, a colleague asked me: “Should I buy Zoom (ZM)? It’s down 87% off the highs and at pre-Pandemic levels.”

My answer was no. And you should be able to guess why.

You buy a stock because you can make a strong case for it going up. Not because it dropped by some random percentage. 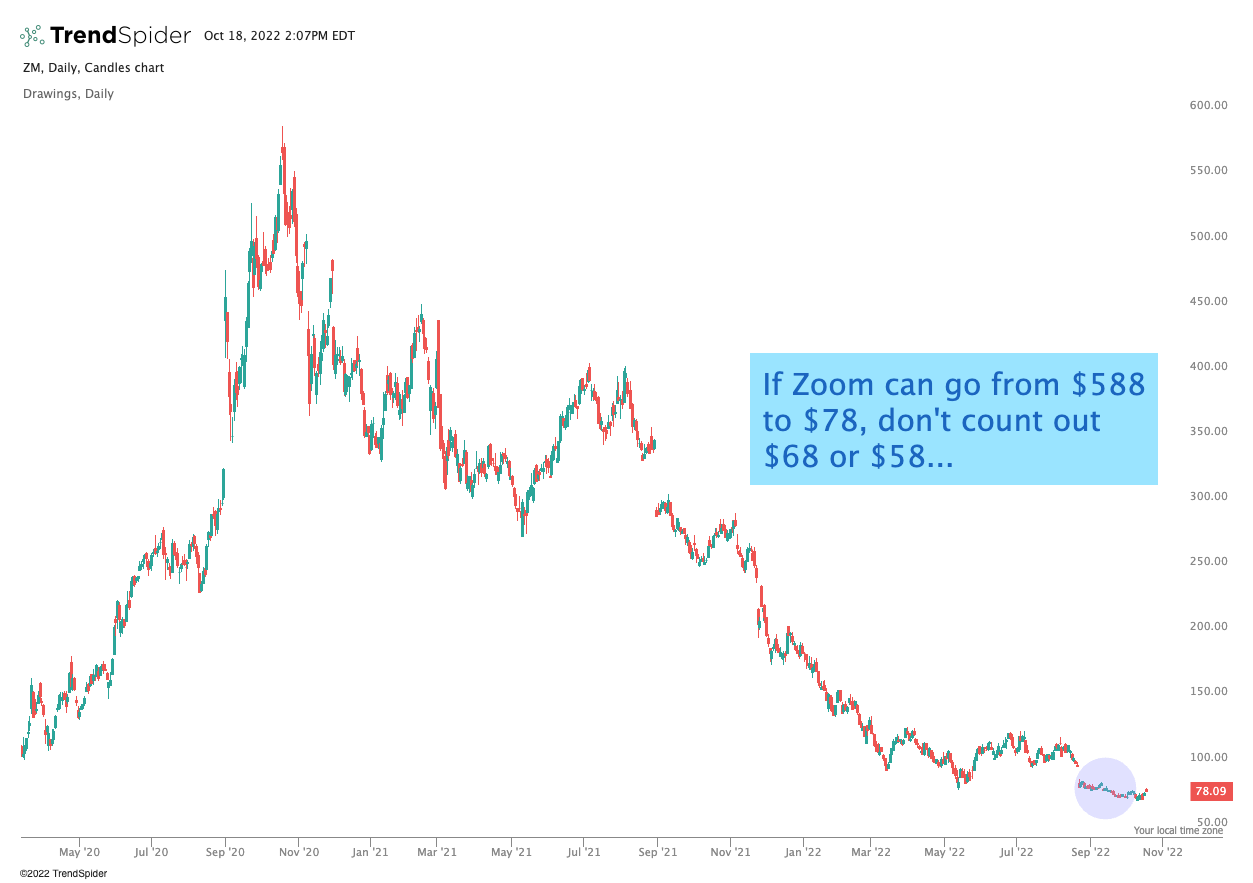 According to SlickCharts.com, just 87 stocks in the S&P 500 are up this year.

And most of the names in the green are in energy, defense, health care, and consumer staples. That makes sense because of the war in Ukraine and the Fed’s tighter monetary policy.

So if you made money this year, it’s because you understood the environment. You most likely did some combination of the following:

In fact, I’ve been telling my community over and over that this coming earnings season is not about earnings.

Yes, there are times when fundamentals matter, but right now, it’s about whether the Fed gets back on our side.

And as we saw in 2009, the market bottomed way before the numbers got better.

One of the most unusual things about a bear market is how hard stocks can rally.

The market can be on the verge of death… only to skyrocket faster and harder than you can ever imagine.

But the strength tends to disappear in a flash. It’s like the sellers are pulling a prank on you.

So you have to buy when it feels most wrong to buy.

And you have to sell when it feels like the market is finally turning around.

Take this XBI chart. As you can see, I sold some at point B, and it kept going up. 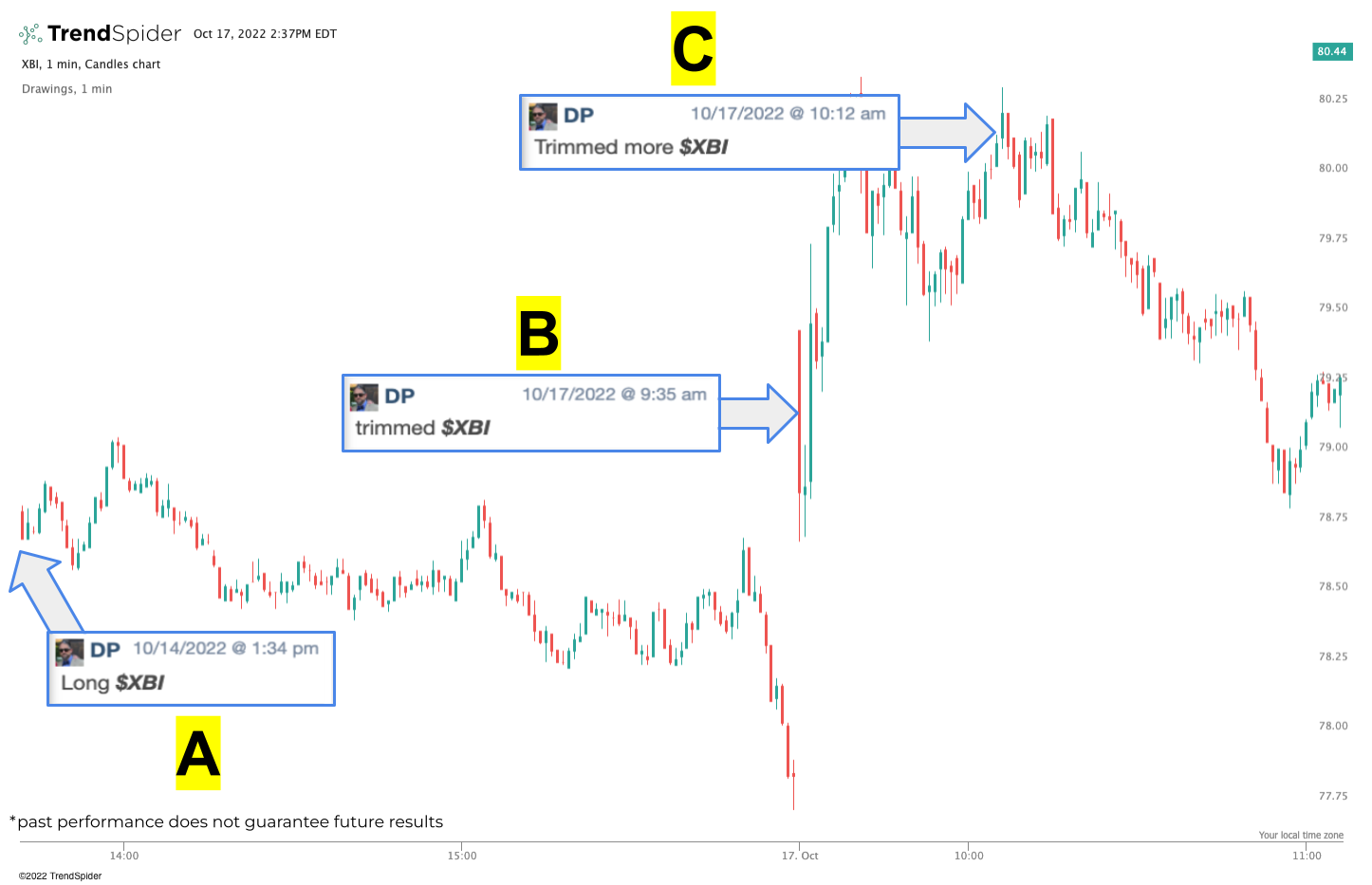 You could say I sold that piece too early, but I know from experience that in this market, those gains could have been gone just minutes later.

And of course, I sold more at point C, after which XBI dropped.

This process of trimming and trailing has been key to Inner Circle’s success in the 2022 bear market.

Rule #4: Leave Emotion At The Door

This is easier said than done.

But, I have a simple rule for managing your emotions when the market is spiraling out of control:

Size down, because size dictates emotion. That applies whether you are going long or short.

The more money you have on the line, the more stressed you’ll feel.

So you don’t want to press too hard.

Because when you’re wrong, your losses will be smaller. And yes, you must get used to taking losses.

And when you’re right, you’ll tell yourself “I knew I should have bought more.”

But you have to remember that since bear market rallies are so powerful, you can make quite a bit of money from smaller positions.

So don’t worry about missing out.

As long as you can hit singles and doubles while minimizing your losses, the money will pile up.

Rule #5. Averaging Down is Pointless

In a bear market, you could be tempted to buy a stock like Tesla (TSLA) at $250.

So you buy a few hundred more shares.

And just because the bear can be so cruel, you hit the eject button… right before the stock goes up $100 in a week off a strong earnings report.

Instead, be ready to dump anything that is not working.

Since bear markets gyrate so much, odds are you’ll have another chance to get in down the road.

Averaging down is for bull markets only. And even then you have to be careful.

Rule #6: Always Have Capital on Hand

And on the flip side, bear markets always push things too low.

You must always have capital on hand, because you want to put money to work at the extremes.

And if you play it right, you can make life-changing money.

Do you realize that you could have bought Apple (AAPL) under $3 in 2009? (adjusted for splits) 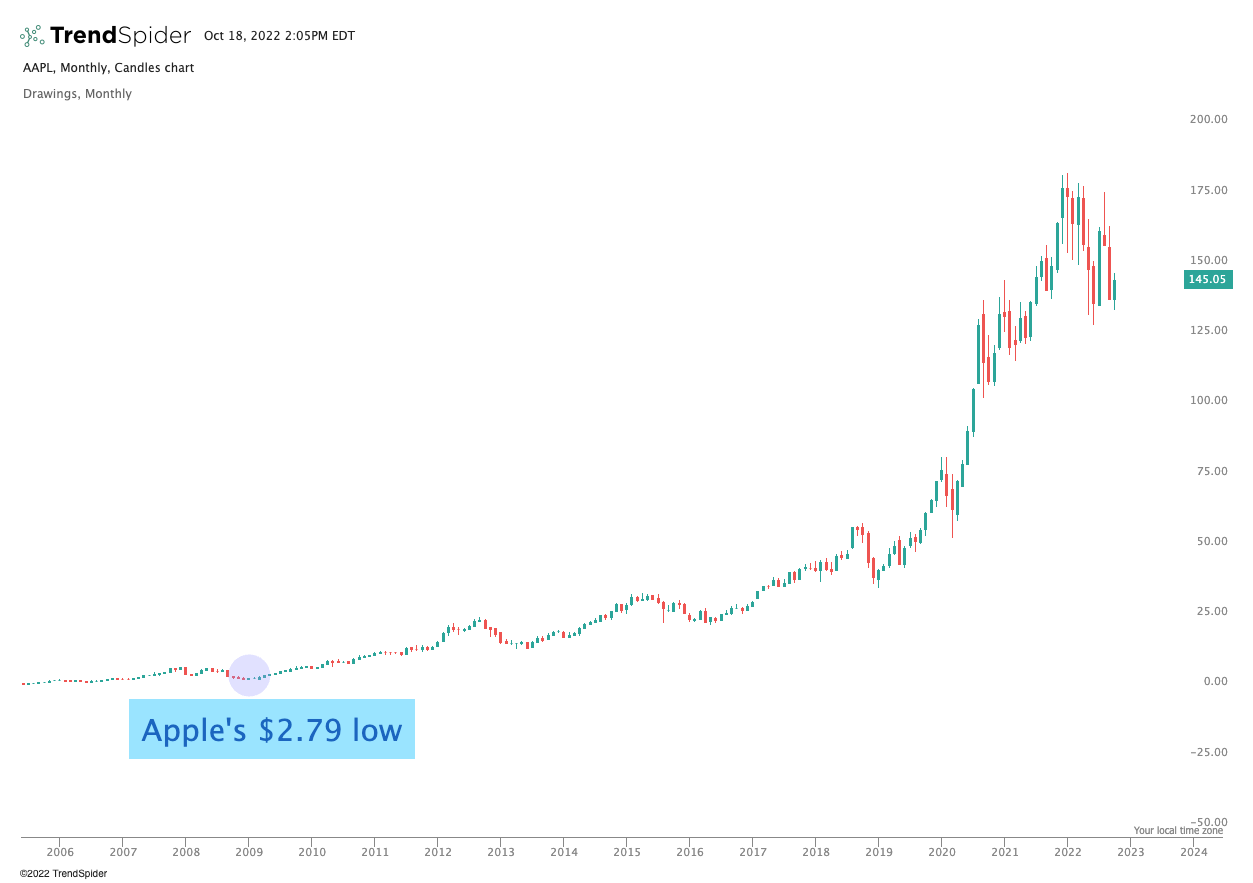 These opportunities don’t come along every day, but you only need a few of them!

Rule #7: Don’t Be a Hero Unless You Look Great in Tights

As general life advice, you should try to be the hero in your own story.

But you’re not in a movie about a trader that’s one trade away from fixing their life.

In a bull market, you’re always one trade away from owning a new Ferarri.

In a bear market, you’re always one trade away from bankruptcy.

If you want my help navigating the market on a day-to-day basis, I suggest applying for Inner Circle.