DWAC: 8 Things You Need to Know About This Meme Stock Monster

What was the biggest story in the stock market this week?

NO. The biggest story in the market was... DWAC.

Here's what you need to know:

The #memestock boom began in early 2021 when traders on Reddit and other social platforms started piling into a small number of story-based stocks like AMC (AMC) and GameStop (GME).

Look at this long-term monthly chart of GameStop: 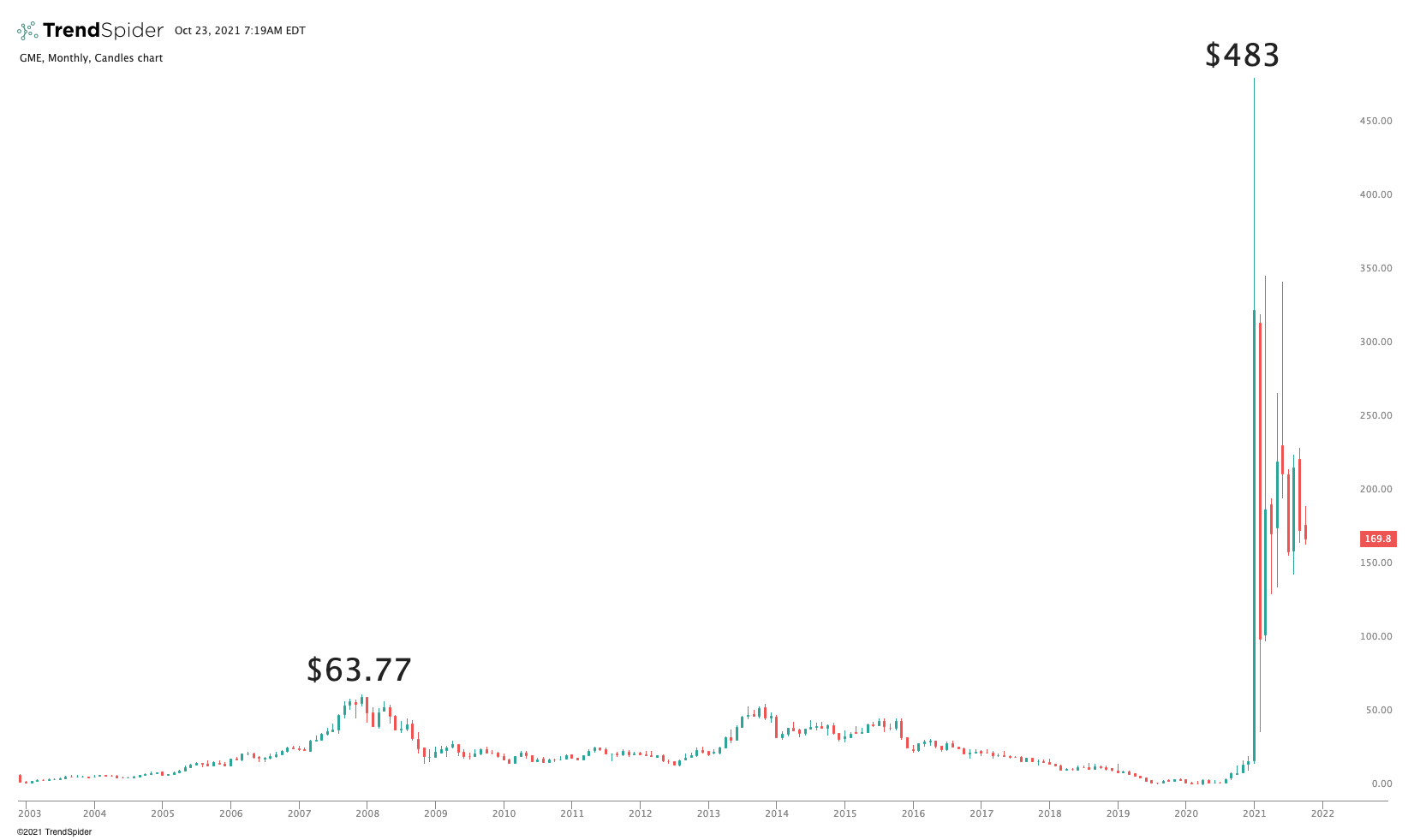 In December 2007 before the housing crash, GameStop hit a then record high of $63.77. The video game retail business was BOOMING thanks to the emergence of Halo, Call of Duty, and Guitar Hero. (ain't that a blast from the past?

But thanks to #wallstreetbets and the meme stock boom, GameStop hit $483 in early 2021 -- while the business was clearly in decline.

The meme stock universe is always hungry for hot, crazy, fast-moving stocks, especially when there's some kind of populist or antiestablishment theme.

These people do not want to hear about fundamentals and market caps and enterprise value and earnings.

These traders want to strap themselves to a rocket and make fast cash, especially when there's a chance to go against the Wall Street establishment.

And just like that, a meme stock was born.

What made DWAC a meme stock? 3 things:

1) DWAC/TMTG's business model, the centerpiece of which is a platform called "Truth Social," was mocked. Mostly for claiming Truth Social would compete with Facebook (FB) and Netflix (NFLX). DWAC also has an unconventional leadership team, including CEO Patrick Orlando, who operates another SPAC called Yunhong International (ZGYH)... which operates out of Wuhan, China of all places.

2) DWAC is a SPAC, which #memestock fans love because they can run so fast.

3) President Trump brought a real story and maximum emotion to the equation.

Regardless of how you feel about President Trump, we can all agree on two things: he is a magnet for attention, and he still has a lot of fans that automatically like what his critics attack.

This created an absolutely EXPLOSIVE meme stock situation. So let's look at what happened.

DWAC Had Perhaps the Most Shocking Stock Explosion in History

We can't reliable claim this the single biggest explosion in a stock ever, but it's got to be pretty darn close.

But you want to know what's really interesting? Check this out...

There May Have Been Some Funny Business Going on...

The DWAC-Trump announcement hit Wednesday after the close. Reuters covered it in a story at 10:08 p.m. that night.

Yet... volume on DWAC had mysteriously picked up in the days ahead of the release.

How does an unknown SPAC see a nearly 700-fold increase in volume from Monday to Wednesday?

Did somebody know something?

There Was PLENTY of Time to Get in DWAC

But even with potential funny business going on, there was plenty of time to get In DWAC.

The story was buzzing on social media during the premarket Thursday. Here's a 15 minute chart showing the early action: 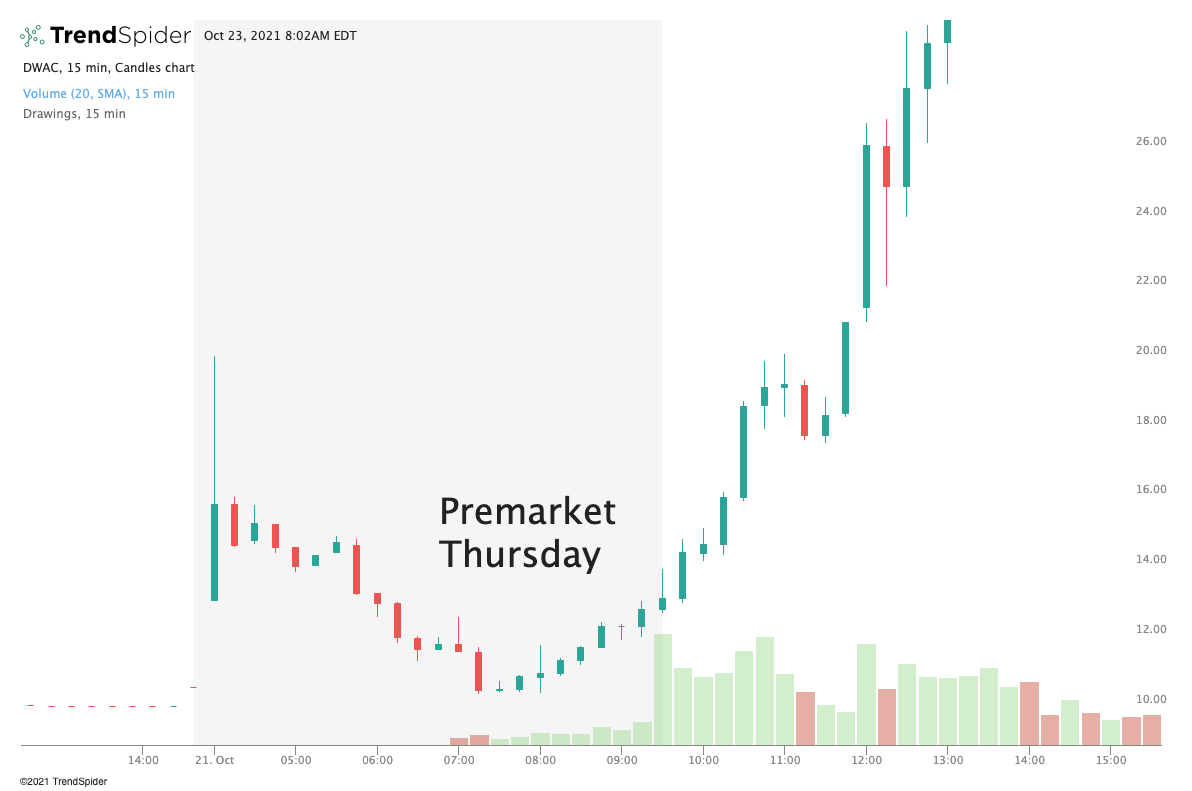 As you can see, volume started coming in around the $10 to $12 range between 7 am and the open.

It was also a heavy topic of discussion in T3's own Virtual Trading Floor® rooms, where our room moderators called out ideas in DWAC and ancillary plays like Phunware (PHUN).

So you didn't have to be Johnny on the spot. Heck, even if you waited until after the open, you could have easily gotten in under $15... and rode it to a close of $65.50.

According to the SEC, "a U.S. stock exchange that lists a stock is required to issue a trading “pause” in a stock if the stock price moves up or down by 10% or more in a five-minute period.

And since DWAC was moving so fast, it was halted multiple times on Thursday and Friday.

This was tremendously stressful for traders, who were forced to wait 15 minutes or more to see what happened next.

The stock would open and you could be up or down 20% in the blink of an eye... only to see it be halted again.

Bid-ask spreads were also very wide, and with the stock jumping around so quickly, it was difficult to place limit orders with any semblance of precision.

Many traders just entered market orders and hoped for the best.

Some Traders Won Big... Others Got Left Holding the Bag...

As you can see in this 15 minute chart, the DWAC boom started in the $10-$12 range Thursday morning. 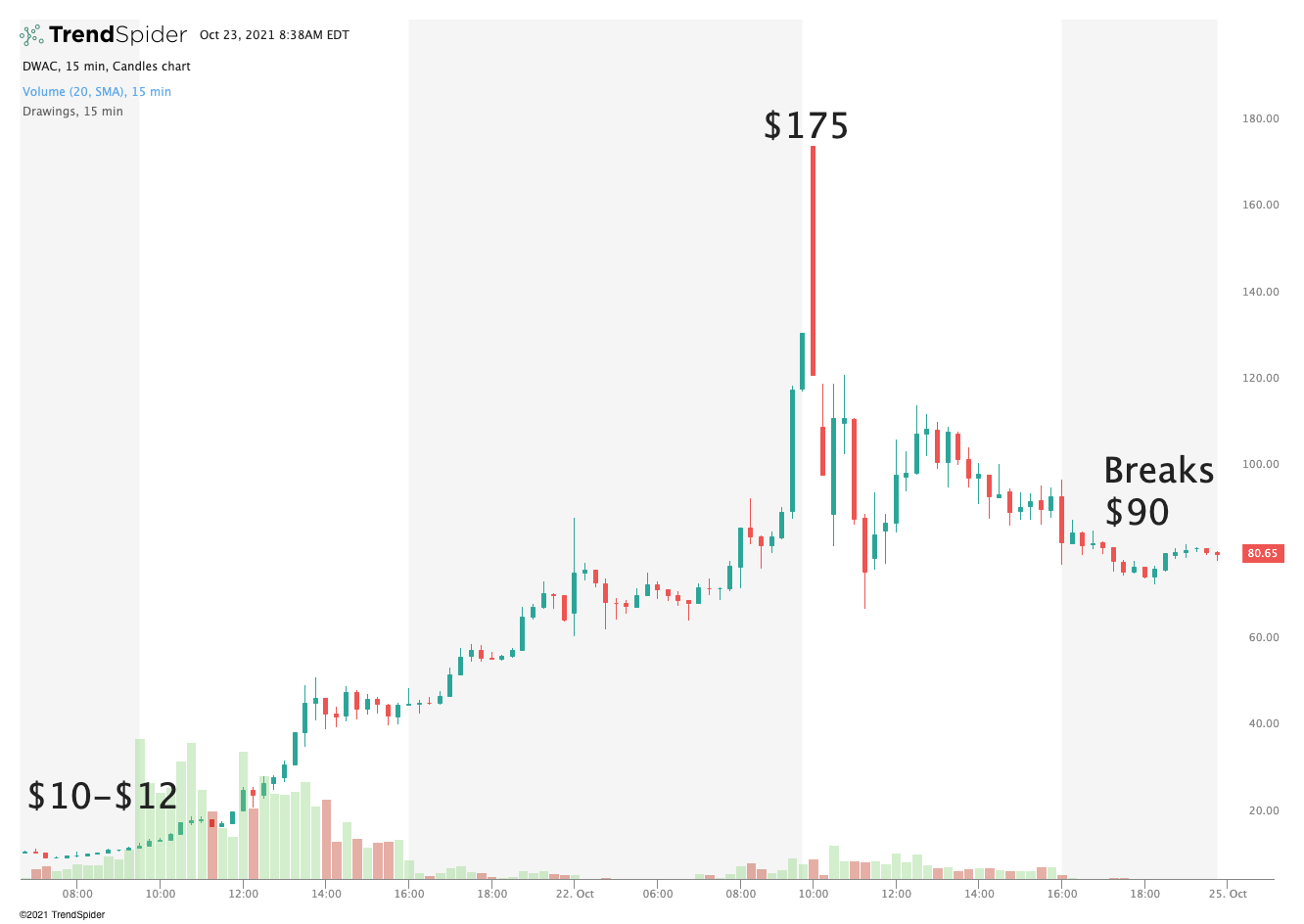 It went up all day Thursday.... then continued skyrocketing overnight.

Presumably, traders expected a GameStop like move and were taking a "whatever it takes" attitude towards getting in.... or out.

One trader we spoke with said "I sold about 80% of my DWAC at $157 and then started panicking because they kept halting it and I wanted out. I eventually just put in a market order and sold the rest at $85."

We Are Seeing a Lot of Fake News 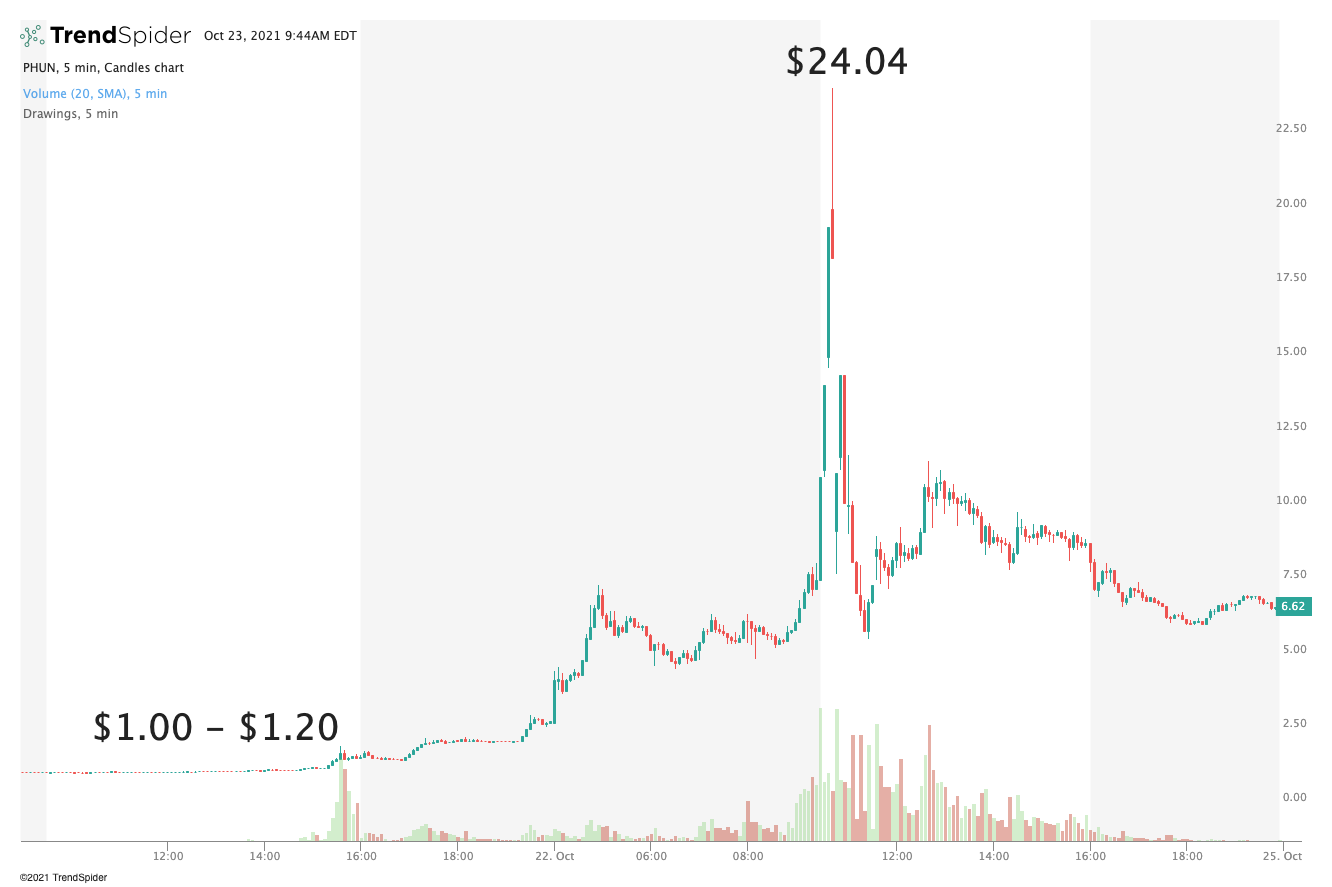 Because people were chattering that PHUN would provide software for Truth Social. Is that true? It's hard to say, but the proof is in the pudding and people bought the story.

We Could See a Monday Morning Panic

We're writing this on Saturday morning. And odds are, trades panic Monday morning.

Because DWAC dropped after hours Friday: 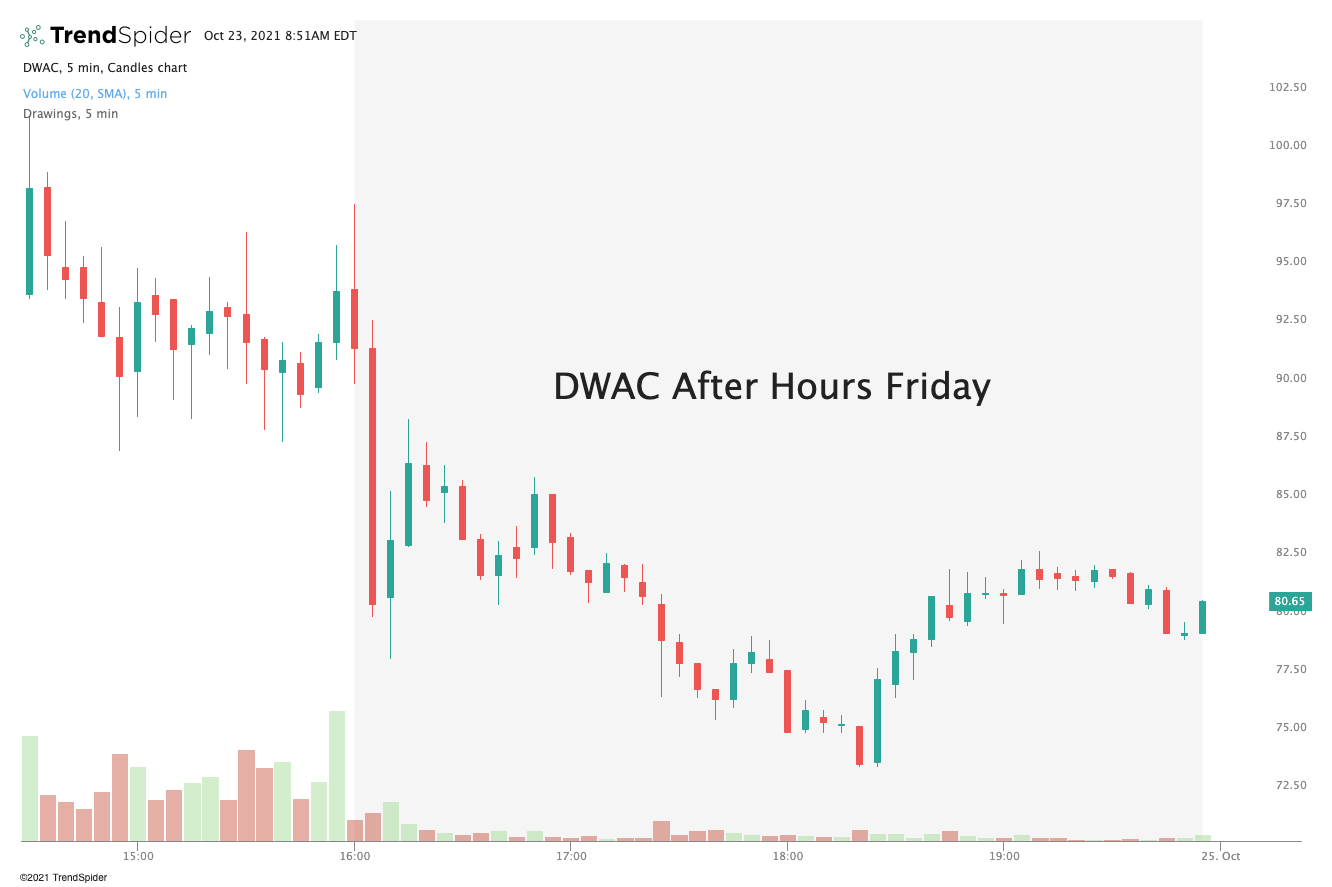 Now, come Monday, we could see a selling panic... or a buying panic.

Because if people bought at $90+ looking for a rebound, they may freak if they see DWAC in the red early Monday. They may just dump and life to fight another day.

On the other hand... what if the #wallstreetbets crowd decides it's dip buying time? What if they remember GameStop at $483 and think DWAC could be next?

At the risk of stating the obvious... ANYTHING CAN HAPPEN.

Be careful out there...

Did You Trade DWAC?

Let us know how it worked out in the comments below... and make sure you join our newsletter!

Join our email list and get the video straight to your inbox every day at 4:15 p.m. ET.

I got in DWAC at $15 and made over 300% profit I sold around $130 took my profit and got into Phun. Hoping for the same outcome Monday for phun

I first placed a limit order at 90 on Friday but was watching it rise so quickly pre-open, I decided to flip to a market order and got filled around 110, I rode it up to 150, almost cashed out but decided to wait. I knew it would tank and yes there may be a Monday morning panic but at the end of the day I think there will be a buying frenzy this week after all the Trump supporters, anti-establishment, anti-government, anti-Wall Street people buy in and run it up like they did GameStop so I’m holding with an exit in a few days dependent on conditions. I am also the holder of several 2022 put options on the entire market, Dow, S&P and NASDAQ. Winner winner chicken dinner 😎💎🥂